We did an international, multicentre, randomised trial at three sites in Israel, one site in the Netherlands, and two sites in the USA between Feb 1, 2012, and March 31, 2013. Patients aged 18–70 years referred for colorectal cancer screening, polyp surveillance, or diagnostic assessment underwent same-day, back-to-back tandem colonoscopy with standard forward-viewing colonoscope and the full-spectrum endoscopy colonoscope. The patients were randomly assigned (1:1), via computer-generated randomisation with block size of 20, to which procedure was done first. The endoscopist was masked to group allocation until immediately before the start of colonoscopy examinations; patients were not masked. The primary endpoint was adenoma miss rates. We did per-protocol analyses. This trial is registered with ClinicalTrials.gov, number NCT01549535.

197 participants were enrolled. 185 participants were included in the per-protocol analyses: 88 (48%) were randomly assigned to receive standard forward-viewing colonoscopy fi rst, and 97 (52%) to receive full-spectrum endoscopy colonoscopy fi rst. By per-lesion analysis, the adenoma miss rate was signifi cantly lower in patients in the full-spectrum endoscopy group than in those in the standard forward-viewing procedure group: fi ve (7%) of 67 vs 20 (41%) of 49 adenomas were missed (p<0·0001). Standard forward-viewing colonoscopy missed 20 adenomas in 15 patients; of those, three (15%) were advanced adenomas. Full-spectrum endoscopy missed five adenomas in fi ve patients in whom an adenoma had already been detected with first-pass standard forwardviewing
colonoscopy; none of these missed adenomas were advanced. One patient was admitted to hospital for colitis detected at colonoscopy, whereas fi ve minor adverse events were reported including vomiting, diarrhoea, cystitis, gastroenteritis, and bleeding.

Full-spectrum endoscopy represents a technology advancement for colonoscopy and could improve the efficacy of colorectal cancer screening and surveillance.

Colonoscopy is regarded as the gold standard for detecting polyps, but the rate of overlooked polyps is still between 15% and 30% [1,2]. The adenoma detection rate (ADR) is the most important quality parameter here for (screening) colonoscopy [3–7], as it has been shown that the adenoma detection rate correlates with the rate of interval carcinomas [5,8]. This has also been set out in the new EU guidelines on quality assurance for colorectal screening examinations [7].

Several studies in recent years have been concerned with endoscopic techniques aimed at increasing the ADR — mostly with little success so far as various imaging techniques are concerned, such as narrow-band imaging (NBI) [9,10] or equivalent techniques by other manufacturers [11] and also high-definition technology [11,12], as well as older wide-angle colonoscopes (up to 170°) [13–16].

A new wide-angle colonoscope now provides a viewing angle of 330°, at least on one level, which represents practically a doubling in comparison with previous endoscopes. The study [17] was conducted in six centers — three in Israel, one in the Netherlands, and two in the USA — although more institutions are mentioned in the list of authors. The primary end point was the rate of overlooked adenomas (the miss rate), in a tandem design in which adenomas that had been overlooked at the first colonoscopy were used in the second examination as the study’s primary end point. The standard instruments used were devices manufactured by Olympus (the 160 and 180 series, usually with angles of 140°; only 170° with normal-caliber colonoscopes in the 180 series) and Pentax (the device generation is not stated, only the EPKi processor, available since 2012 with an angle of 140°).

The results, based on 185 patients, show a clearly reduced miss rate of 7% versus 41% with the new wide-angle colonoscope. In detail, the figures were as follows:

Limitations of the study include limited numbers of patients and unequal group numbers (88 vs. 97). In the standard group in particular, four patients who did not meet the inclusion criteria were excluded retrospectively. Five centers, with numbers of endoscopists that are not stated, also participated over a period of 14 months, so that the inclusion rate was around three patients per center per month — not surprising in view of the effort involved in a tandem study with double examinations. Overall, the numbers of adenomas identified in the group with the Fuse device as the first examination was around 35% higher (67 vs. 49), but this was not significant with these case numbers. The adenoma rates at the first examination in the control group (29 adenomas in 25 patients gives an adenoma rate per patient of 28%) were in a range similar to that in Germany’s ZI registry. A confirmation study including more patients and a homogenous patient group (e.g., with screening alone) would nevertheless be desirable. Overall, although tandem studies are conceptually superior [17], they are not only more elaborate and costly, but also more artificial, since in clinical practice colonoscopy is of course only carried out once. However, single-arm studies require larger numbers of patients. As mentioned, studies of this type have not yet shown any advantage for traditional wide-angle colonoscopes [13–16], although the differences in these studies were not as large (170° vs. 140°) as with the new wide-angle colonoscopes. In addition, the control group in this study appears mainly to have been examined using colonoscopes with a 140° angle. Overall, however, it can be stated that wide-angle colonoscopes (prototypes from other manufacturers also exist) do have potential. 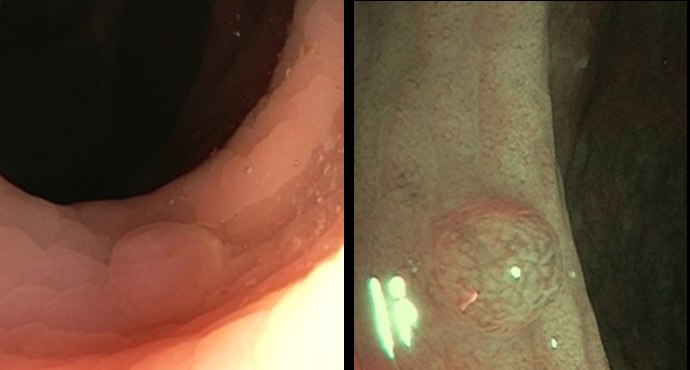 The NICE (NBI International Colorectal Endoscopic) Classification is based on narrow-band images of colon polyps.