Hiatus hernias and the Hill classification

Herniation of the stomach through the esophageal hiatus into the mediastinum is known as hiatus hernia. It is a frequent incidental finding during gastroscopy. The prevalence of the condition increases with increasing age and when there is raised intra-abdominal pressure (e.g., in obesity or pregnancy). Male sex is also a risk factor for the presence of hiatus hernia [1].

Three types of hiatus hernia are distinguished. Axial hiatus hernia (synonyms: axial sliding hernia, type I hiatus hernia), in which the esophagogastric junction and sometimes the cardia “slide” in a supradiaphragmatic direction, is the most frequent type, representing more than 90% of cases. Depending on its severity, it can cause spatial dissociation of the complex sphincter muscle apparatus, consisting of the diaphragmatic crura and smooth-muscle wall of the cardia. This can lead to insufficiency of sphincter muscle function in the area of the lower esophageal sphincter. Axial hiatus hernia may be, but is not necessarily, associated with gastroesophageal reflux disease. An indication for treatment of axial hiatus hernia is only present when there is functional evidence of reflux disease, secondary disturbance of esophageal motility, or volume reflux.

When other parts of the stomach than the esophagogastric junction or cardia herniate in a supradiaphragmatic direction and thus come to lie alongside the esophagus, the condition is described as paraesophageal hiatus hernia (synonym: type II hiatus hernia). The maximal variant of this is complete thoracic stomach (known as “upside-down stomach”).

A mixed form consisting of axial sliding hernia and paraesophageal hernia represents type III hiatus hernia. Types II and III hiatus hernia are much more rare, and due to the potential complications associated with them (chronic bleeding, anemia, incarceration), they basically represent an indication for surgery.

To allow more precise assessment of the competence of the esophagogastric sphincter mechanism, Hill et al. presented a practical classification in 1996. The gastroesophageal flap valve is inspected in inversion and classified into one of four categories [2]. 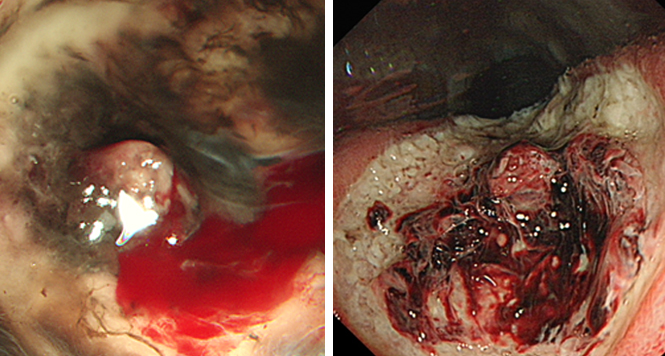 The Forrest Classification was first described in 1974 by J.A. Forrest et al. in The