Gastric inlet patches (heterotopic gastric mucosa of the esophagus) correspond to functional stomach tissue which are not located at the anatomically usual position.
They are typically located in the upper part of the esophagus and have a very different morphology compared to the surrounding tissue. The appearance is often salmon-colored and island-shaped.
They can be detected in up to 12% of the normal population and are mostly discovered by chance in an endoscopy of the upper gastrointestinal tract. In this case those findings have no pathological relevance.
Based on this entity, only isolated cases of relevant diseases (ulcerations, neoplasia, fistulas, stenoses, etc.) have been described. In only rare cases, the gastric inlet patches cause clinical complaints. IN such cases an association with symptoms of atypical reflux, such as globus sensations and sore/burning throat, has been frequently described.
In recent years, various working groups have reported that ablation of the islands by argon-plasma coagulation leads to an improvement of symptoms when heterotopic gastric mucosa of the esophagus and oropharyngeal reflux symptoms coexist.
In patients with oropharyngeal reflux symptoms it is therefore important to search for islands of heterotopic gastric mucosa and to discuss an APC ablation, especially for patients with a high level of suffering.

Various forms of presentation of heterotopic gastric mucosa of the cervical esophagus in narrow band imaging (NBI) mode. 1a represents a tiny island, 1b two larger islands opposite to each other, 1c several small scattered – and 1d a depressed island.

Various rather atypical forms of presentation of heterotopic gastric mucosa of the cervical esophagus in narrow band imaging (NBI) – and white light mode. 2a represents a lesion which appears cystic in white light mode, histology detected heterotopic gastric mucosa. 2b in the NBI mode also represents a cystic heterotopy, in addition there are few other more typical appearing heterotopias. 2c shows an ulcerative – , 2d a lesion encompassing the complete circumference.

Using the VIO generator (ERBE GmbH, Tübingen, Germany) with “forced coagulation” and 20 watts in connection with a 4 mm distance cap placed on the endoscope, the aim is to achieve complete ablation. Figure 3a shows the initial findings, 3b (NBI mode) and 3c (white light) shows the ablation site after removal of the cell detritus with the cap.

Figure 4a shows a heterotopic gastric mucosa covering >75% of the circumference. Complete APC ablation (4b) led to an endoscopically visible stricture (Fig. 4c). However, this had no clinical relevance. In heterotopias of at least this size, argon-plasma should therefore be avoided; radiofrequency ablation may be associated with a lower risk of stricture. 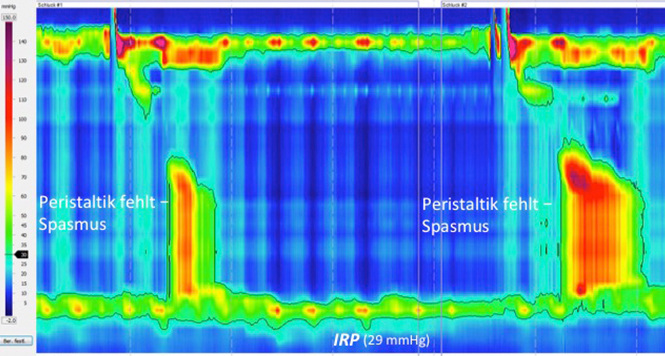 Achalasia is one of the differential diagnoses in patients with symptoms of dysphagia. High-resolution (HR) 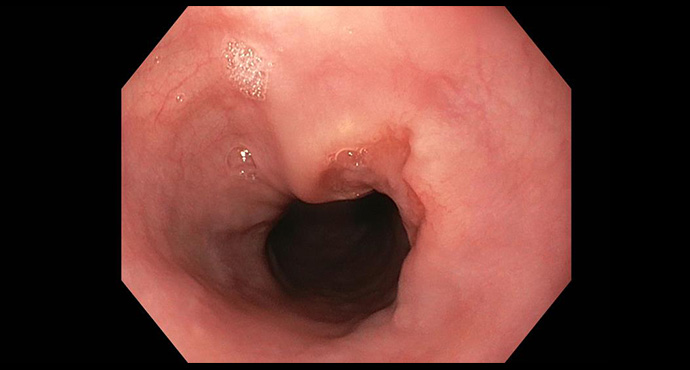