When the Z-line is not completely normal

Depending on the patient’s degree of sedation and the examiner’s level of experience, carrying out a precise examination of the Z-line may not be very easy. However, it is worth taking biopsies from minimal focal changes, areas of reddening, bumps and irregularities, even when they have an “inflammatory” appearance. Contact vulnerability when the device is passing should also attract attention.
NB: nearly all of the following cases were examined and biopsied by colleagues in private practice. The challenge lies in filtering out suspect findings from among the mass of inflammatory changes that are caused by reflux.

Left: a patient with a focal lump at the Z-line. The biopsy showed that there was low-grade intraepithelial neoplasia (LGIN) / low-grade dysplasia.
Right: In close-up and with NBI, minor structural irregularities appear. The extent to which these correlate with the histology remains unclear. However, endotherapy is indicated when there is histologically confirmed LGIN.

A patient with a small lump at the Z-line, which resembles an adenoma. Histological analysis after mucosectomy showed that it was a mucosal carcinoma.

A patient with biopsy findings of high-grade intraepithelial neoplasia (HGIN) / high-grade dysplasia and only slight reddening (visible in inversion, arrow).

Near the Z-line at the center on NBI and after acetic acid staining, focal structural changes are seen that produce an irregular pattern with small foci. After EMR, the lesion was found to be a T1m3 carcinoma.

A lump above the Z-line, with no other irregularities on the macroscopic view.

On NBI and with acetic acid staining, similar structural irregularities are seen at the Z-line, although not as marked as in Case 3. The impression is one of undermining growth under the Z-line extending to the small island at the top (left image).

With more insufflation, a focal lump is again seen at the cardia at the 12-o’clock position. The biopsy showed high-grade intraepithelial neoplasia (HGIN) / high-grade dysplasia.

On NBI and with acetic acid staining, slight structural irregularities and again the impression of the squamous epithelium being undermined were seen. 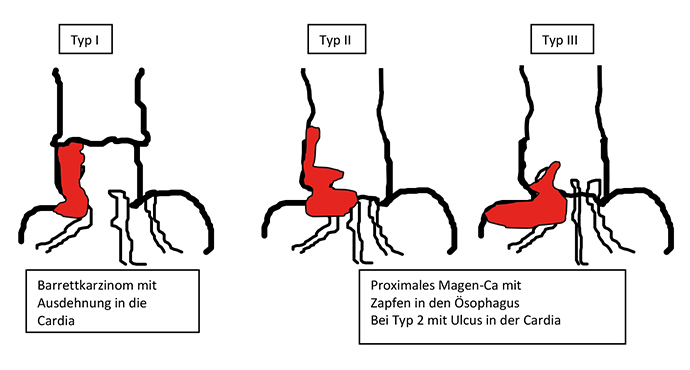 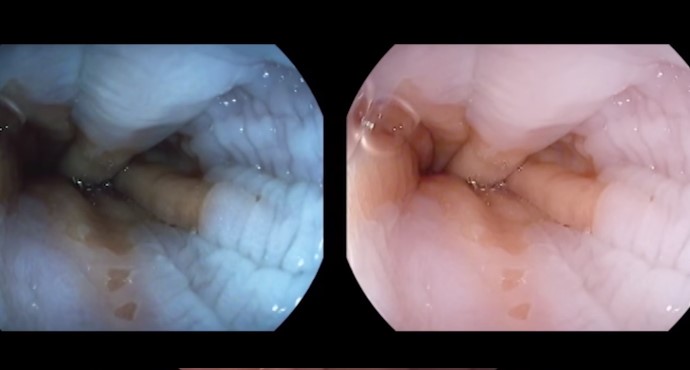 Visualization of the Z-line without enhancement and with iScan, obstructed by esophageal motility.