In contrast to esophageal varices, there is only one classification system for fundic varices, developed by Sarin et al.[1, 2]. It is also used in the official terminology of the German Society for Digestive and Metabolic Diseases (DGVS; available on the DGVSweb site and the AWMF web site).

The only other parameter used is the maximum size of the varix in millimeters.

For classification of varices in the fundus, the esophagogastric junction should be viewed in a prograde fashion, and the fundus and cardia should then be viewed in inversion with good insufflation.

Extension of varices across the cardia toward the lesser curvature and into the gastric fundus.

Extension of varices beyond the cardia toward the greater curvature and into the gastric fundus.

The varices course in the gastric fundus or cardia, but do not pass into the esophagus and do not reach the cardia.

“Ectopic” varices in all other sections of the stomach (below the fundus), in this case in the gastric body.

General notes on the classifications

Classifications of varices apply strictly only to the primary assessment, before (endoscopic) therapy; classifications after treatment (injection therapy) are more difficult. In that case, the (residual) varices should be described in terms of number, location, and maximum diameter or red signs. On endoscopic ultrasound (EUS), smaller vessels are often seen in the walls, but these are of no relevance. However, EUS can demonstrate residual flow when the endoscopic findings are unclear after therapy.

Endoscopic image of a fundic varix after Histoacryl injection. On EUS, a fully lined varix with hyperechoic areas (Histoacryl) is seen, with an acoustic shadow, and with small intramural wall varices alongside that are of no clinical relevance.

There have been no studies directly dealing with the issue of interobserver variability in classifying fundic varices, only on the general assessment of gastric signs of portal hypertension [3, 4]. 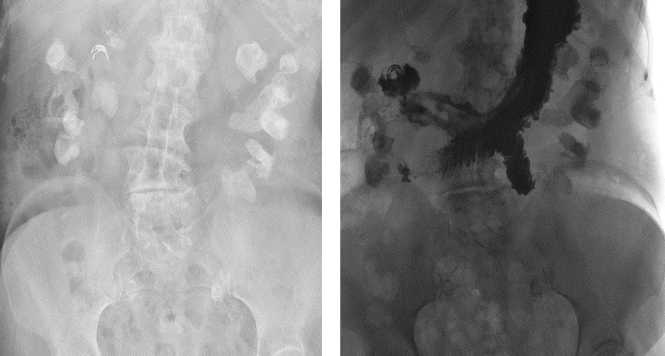 Background Perforation of an acute ulcer is a serious and life-threatening condition. Treatment for this