Retrospective multinational study including SCN diagnosed between 1990 and 2014.

After a 3-year follow-up, clinical relevant symptoms occurred in a very small proportion of patients and size slowly increased in less than half. Surgical treatment should be proposed only for diagnosis remaining uncertain after complete workup, significant and related symptoms or exceptionally when exists concern with malignancy. This study supports an initial conservative management in the majority of patients with SCN.

Cystic pancreatic tumors are increasingly being detected at the asymptomatic stage, thanks to improved imaging, and “screening” imaging in particular. This often then leads to differential-diagnostic problems. If the patient has previously had pancreatitis, or if recognizable chronic pancreatitis is present, it is nowadays assumed (although this has also not yet been proven) that there is cystic neoplasia. The question of malignancy or potential malignancy takes priority here, and this affects above all mucinous neoplasias — mucinous cystic tumors and intraductal mucin-producing tumors (IPMN or IPMT). Good recent reviews on the topic may be referred to (1–3).

Serous cystadenomas (SCAs) are benign cystic tumors that occur more often in women than in men, and particularly in the seventh decade of life (at least in older studies). They have a characteristic appearance, with multiple small or different-sized cysts (in a honeycomb pattern), as the illustration from the paper here shows. They sometimes have a central scar (right).

A very large retrospective collection of cases from 1990–2014 has now been published on the topic of SCAs, in which 61% of the 2622 patients included were asymptomatic. Around a quarter of them (27%) had nonspecific abdominal pain; by contrast, specific symptoms such as pancreaticobiliary pain (whatever that is exactly), diabetes, and other symptoms were only in single-percentage figures. On imaging, 45% of the lesions were described as microcystic, 32% macrocystic, 18% mixed, and only 5% solid; calcifications were reported in 15% of cases. In 11% of the patients, the pancreatic duct was blocked up behind the tumor. The lesions were located in the head, body, and tail of the pancreas in 40%, 34%, and 26% of cases, respectively. Incidentally, 74% of the patients were women and their mean age was 58 — a decade earlier than in the older literature (4), probably due to easier access to generally improved imaging facilities (5, 6).

The rate of surgery is surprisingly high (61%); 52% of the patients underwent surgery during the first year after diagnosis; however, the resection rates fell from 94% in 1990–95 to 54% during the period. The indications for surgery were mainly an unclear diagnosis (60%), symptoms (23%; unfortunately it is not mentioned whether these changed postoperatively); and more rarely, tumor size (6%) and organ compression (5%). In comparison with unoperated patients, those with surgery had symptoms more often (52% vs. 23%) and their mean tumor size was larger (4.0 vs. 2.5 cm).

Among the 39% of patients who received follow-up (for a mean of 3.6 years), it is not clear whether and how many more imaging examinations were available. The mean growth rate was 1 mm/year. Unfortunately, there is no further information about this group, and the follow-up is also not very long.

Three patients had malignant SCAs, with sizes between 7.10 and 17 cm. All three of these SCAs had metastasized, and the primary tumor and metastases were resected in all three of the patients. Two patients were either still alive after 1 year, or the follow-up ended after 1 year. The third patient has survived for 9 years. However, it should be mentioned that 18 patients are described whose tumors were characterized as locally aggressive, although unfortunately without further details being given (14 were from a single center). Regional organs, lymph nodes, and peripancreatic vessels were involved. The malignancy rate was accordingly either 3/2622 (0.1%) or 21/2622 (0.8%), but below 1% in both cases. The rate of malignant progression in the patients who did not primarily undergo surgery is not noted, as the follow-up period was probably too short.

These results confirm the benign nature of these lesions, but also the diagnostic problems, which often lead to surgery (“if in doubt, take it out”). Incidentally, the surgical mortality rate was 0.6% (1.5% with Whipple operations, 0.2% with pancreatic tail resections). The mortality rate among unoperated patients was 0.1%; the one patient involved died of pneumonia after ERCP (which is also not indicated in these cases). The greatest risk in these patients is thus surgery. There are of course limitations with this type of retrospective survey, which in addition to the inexactness of data collection do of course include the uncertainty of the final diagnoses in unoperated patients — the diagnosis of SCA was based on highly suspicious findings on radiography (n = 785) and analysis of punctured cystic fluid, which is not described in greater detail; both of these are known to involve elements of uncertainty. The high rate of surgery can certainly be criticized, but in a retrospective study the precise establishment of the indication must of course remain open to a certain extent. Despite that, this is by far the largest series of such tumors in the literature published to date (4–15). The main task for the future is still how to identify SCAs as such with as much certainty as possible, so that these patients do not need to undergo unnecessary operations.

A Case with an Abdominal Fluid Collection 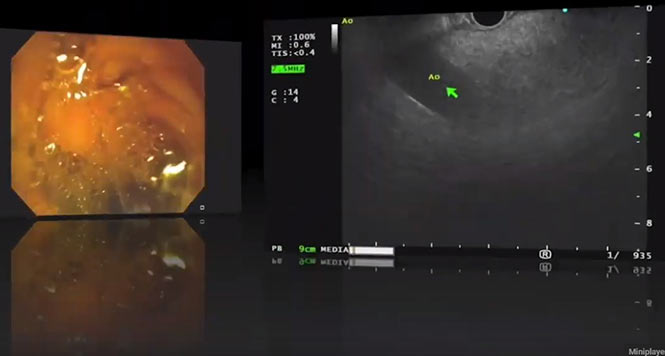