Duodenoscopes with problem bacteria — only in the USA?

Carbapenem-resistant Enterobacteriaceae (CRE) producing the New Delhi metallo-β-lactamase (NDM) are rare in the United States, but have the potential to add to the increasing CRE burden. Previous NDM-producing CRE clusters have been attributed to person-to-person transmission in health care facilities.

To identify a source for, and interrupt transmission of, NDM-producing CRE in a northeastern Illinois hospital.

Association between exposure and acquisition of NDM-producing CRE; results of environmental cultures and organism typing.

In this investigation, exposure to duodenoscopes with bacterial contamination was associated with apparent transmission of NDM-producing E coli among patients at 1 hospital. Bacterial contamination of duodenoscopes appeared to persist despite the absence of recognized reprocessing lapses. Facilities should be aware of the potential for transmission of bacteria including antimicrobial-resistant organisms via this route and should conduct regular reviews of their duodenoscope reprocessing procedures to ensure optimal manual cleaning and disinfection.

It has long been known that bacterial infection can be transmitted via endoscopes. Review studies have shown that infections are still occurring and are usually due to inadequately reprocessed devices (1). Numerous guidelines published by specialist associations therefore meticulously specify the procedures that must be used for this purpose (2–9).

Due to their complicated end section incorporating the Albaran lever, duodenoscopes are particularly susceptible to bacterial contamination. Recently, for example, duodenoscope-associated infections were reported in France (10) and led to new, stricter guidelines and further investigations by the French specialist society, the Société Française d’Endoscopie Digestive (SFED).

The same has now been reported again in the USA and has led to an extremely lively debate there, in which the FDA in particular is involved. The paper that gave rise to this heated discussion investigated 39 cases of hospital infection with carbapenem-resistant Enterobacteriaceae (CRE) in north-west Illinois. Overall, there were no gaps in endoscope reprocessing, although in a case–control approach the affected patients had undergone ERCP significantly more often (odds ratio 78), and in one case a bacterium was found on one duodenoscope that was 92% similar to the relevant bacteria.

Case–control studies such as this paper (11) can certainly be criticized; for this case–control analysis, apparently nine of the 39 cases were used (eight of the nine patients underwent ERCP), and 27 cases from the hospital’s in-patient rehabilitation department with negative rectal smears were used as controls. Is that really enough? But even in the overall group of 39 patients, 35 had undergone ERCP, so that the association was stronger than might be expected. In addition, infections of this type have, as mentioned above, occurred and been reported on previously (1, 10, 12, 13) — unfortunately in Germany as well (12).

In any case, the reactions in the USA were alarming; additional reports appeared — e.g., with an epidemic of 179 suspected cases in the Los Angeles area (www.medscape.com/viewarticle/840015_print) and even before that a literature review on gaps in reprocessing (14). Subsequently, communications from the American Food and Drug Administration (Bacterial Infections Associated with Duodenoscopes: FDA’s Actions to Better Understand the Problem and What Can be Done to Mitigate It)) and the ASGE (in a members’ newsletter of 19 February 2015) came thick and fast, followed by the award of an ASGE grant for research on this type of infection with resistant bacteria. Finally, however, the FDA stated that ERCPs could indeed be continue to be carried out.

And — hot off the press: the ASGE recommendations (“Interim Guidance”) on duodenoscope reprocessing (21 March 2015). 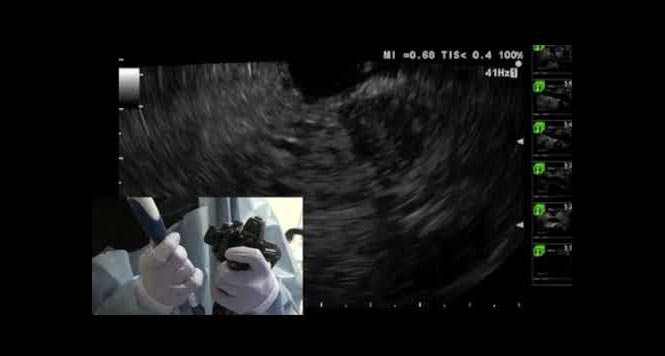 This video demonstrates the EUS-FNA of a pancreatic uncinate mass using the Fanning Technique.