Candidiasis is the most frequent form of infectious esophagitis. The characteristic white plaques, which are difficult to rinse off, are found in approximately 4% of patients who undergo esophagogastroduodenoscopy (EGD) [1]. The plaques consist of leukocytes, necrotic mucosa and Candida pseudohyphae. The most frequent pathogen is C. albicans, with C. glabrata and C. krusei being only rarely found — so that further microbiological diagnosis is not usually required before local treatment with amphotericin B or systemic triazole therapy.

When there is mild involvement in the upper third of the esophagus, local therapy with amphotericin B or nystatin may be considered. However, esophageal involvement usually requires systemic therapy, which should be carried out using fluconazole 200–400 mg/day orally for 14–21 days. If the patient has marked dysphagia, treatment may have to be started parenterally with fluconazole 6 mg/kg body weight per day. Itraconazole/voriconazole or echinocandins are available for refractory courses [4].

The extent of esophageal involvement with Candida can be assessed endoscopically using the Kodsi classification (Fig. 1) [2]. This correlates with the extent of the clinical symptoms and the CD4 cell count in patients with HIV [1]. The classification is easily remembered and allows structured diagnostic assessment at a high academic level. 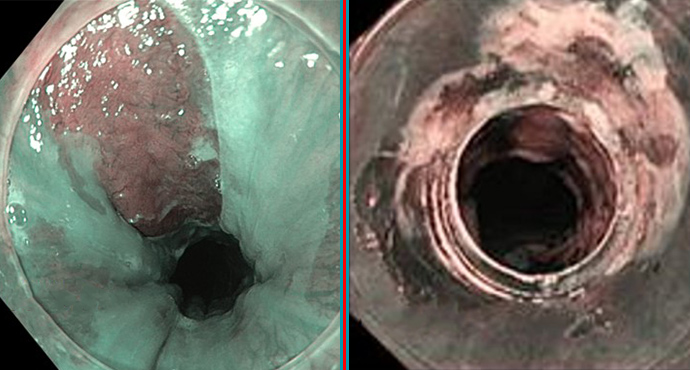